Too close of a call

So I admit I'm not the best at keeping up with this blog, but I do so love reading *other* people's blogs. One of my faves is of my cutie Mrs. Kayla Aimee. She has such a great writing style and a quick wit that has me laughing almost every time I visit it. But last night was different. Last night, I saw a link on her blog to the talented Jody Ferlaak and I followed it. Let me preface this by saying that I am familiar with Jody's work though I don't know her personally. I had heard snippets of her story on layouts or through message board posts. And yet, I still had no idea of the breadth of her story and how much it would touch me.

You see yesterday was the anniversary of the death of Jody's daughter Teagan in a tragic accident. I got caught up in the story last night - reliving the horror with Jody and then getting inspired by her hope for the future and the way she chooses to live her life positively - for herself, her husband and her children. The minute I was done reading, I practically ran up the stairs to my own children's rooms and hugged them a bit tighter and kissed them a bit more in their sleep. I told them again how much each one of them meant to me and how much I loved them because Jody reminded me just how life can change in one brief instant. It was like she spoke directly to me and I wanted to make sure I was listening.

After I went to bed, I was lying there next to my husband and I tried to tell him about the Ferlaak's and the loss of Teagan (who incidentally was about the same age as my youngest when she died). He couldn't quite get it but I kept saying, "You just never know. You just never know."

I didn't realize quite how true that could be. This afternoon with my entire family in the car - all the boys strapped into the back - we headed into the city to run some back 2 school errands. As we almost reached our exit, the car in front of us braked suddenly to avoid hitting the car in front of him who had done the same. We veer off the interstate into the median to avoid them both and as we did, the car in front of us did the same and came sideways at us. We barely missed him at each point and then almost drove into the oncoming lanes. Surely God was looking out for us that not only did we not him anyone but that no one hit us. It completely shook us all up but we were all safe.

We're Rollin' on the River again 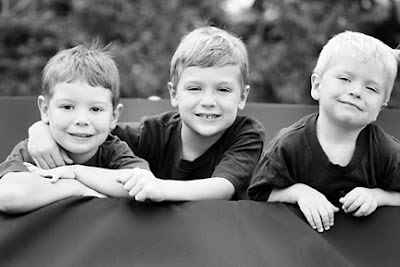 My boys live for our annual trip on the boat with my Uncle. And every year when it's time to go home, they're immediately asking when we're going back! They go 90 mph once they're there - from excursions on the "island" to jumping off the back of the boat to um...flirting with the girls the next boat over. Sigh. So here's our day in picture - including the annual pic (above) I take on top of the boat just for their uncle :) 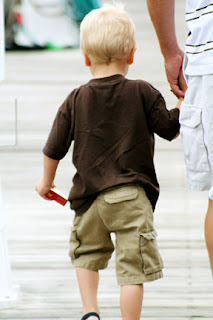 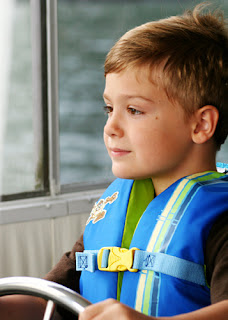 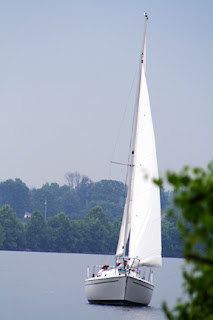 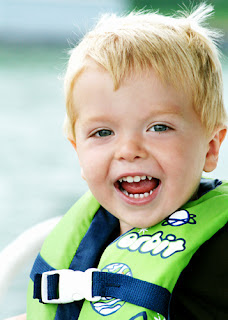 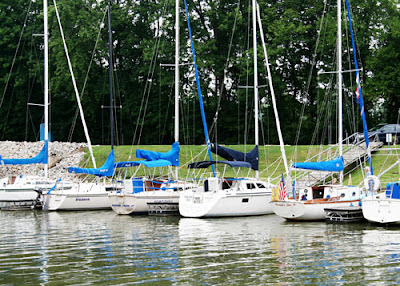 I just love this photo - one day I will have one of those little boats and spend a carefree life just drifting along. It can happen, right? 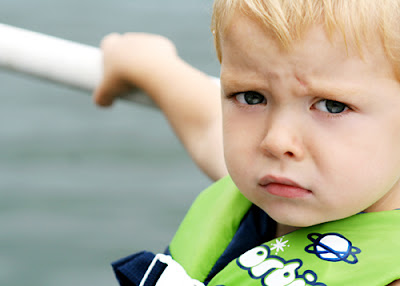 And how can a kid be so darn cute and so stinkin' mean all at the same time? And the best part about going out on the boat? Nine hours on the river has my boys are wiped and they finally manage to let Mama and Daddy sleep in too! Ahhh, Heaven! (Not quite as good as the sailboat life, but I'll take it!)
Posted by Kelly Goree Photography at 7/29/2007 07:32:00 PM 3 comments 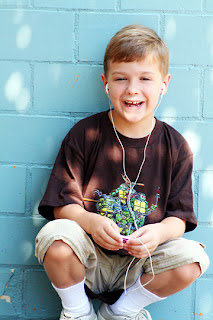 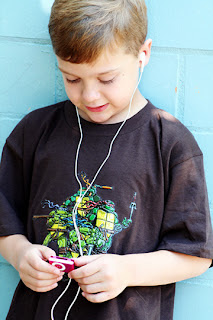 As another school year fasts approaches (August 6th here!), I'm suddenly too aware of how fast time passes and how big the boys are getting. I had really been noticing it in Turner lately, but after doing an impromptu photoshoot of Ethan for our family wall, it's even more apparent in him. He's lost 2 teeth in the past week and is looking a bit snaggly there in the smile department, but his face is taking on an angular look and his clothing and interests are really changing. 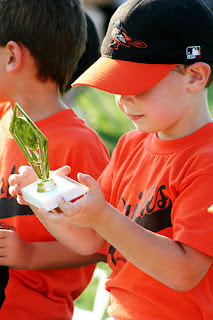 ended up being pretty lucky for this guy! He finally got his trophy for his very first season of tball and was so proud. Those of you that have 2 boys know just how competitive they can get and so this was a huge deal to Turner as big brother already has 5 trophies! We had such a great time this season and T really seemed to love playing. We've aleady signed up for soccer in the fall for all the boys so we'll see how that goes! Not sure I'm ready to be a soccer mom for three!

Just a funny pic - this is Carson running down the side of one of the soccer fields tonight. I was sitting at the bottom, so looking up, there was a surreal looking horizon - almost like in Teletubbie Land....can't you just picture him meeting up with LaLa in a second??! 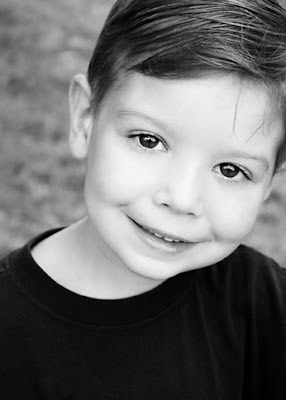 And finally - I had to share this portrait of Turner. I took it in celebration of his 5th birthday. I try to do annual portraits of all the boys because they change so fast at this age. When I pulled it off the camera, I was blown away by this sweet expression on his face. There's just something special about this kid :) 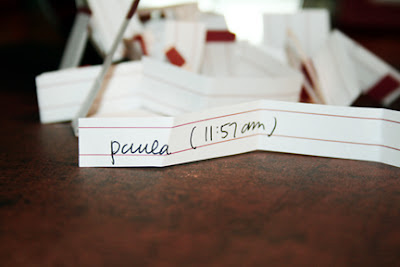 Happy 4th! (Not sure you'll remember me!) 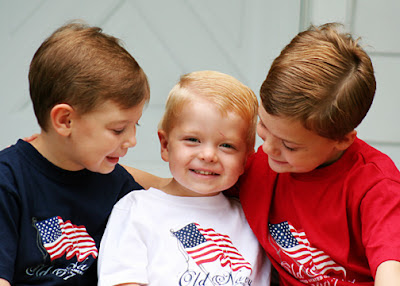 I had all the best intentions, really I did. I've been meaning to post all kinds of updates. The bad thing is the longer I waited, the more things had happened and the more there was to update....so the longer I waited. It was one of those vicious circles, I'm afraid. So I finally had to jump on in and I figured the 4th of July was a good reason (excuse?!) to do that!

A quick recap of the past 2 weeks:
After I returned home, and beyond the jet lag (and yes, to those I promised sharing AUS photos, they will eventually make their appearance here...cross my heart!)...there was Father's Day and Turner's Birthday. And since T's bday was the day after Father's day, we celebrated the same day. We went to a petting zoo, had pizza and, after I got through with it, an upside down cake. It didn't start out that way - it began life as a very cute spiderman cake, complete with web. Of course I have no pics of that to proove it as it soon landed on my mom's wood deck. Thank goodness Turner took it better than I did!

So the actual day of his birthday, we had his t-ball game. All the boys were laying down trying to rest up for it as the games go on pretty late in the evening when we hear this thud and before we can get to the stairs, Ethan is flying down them crying, "Carson is hurt and is bleeding bad!" So not what you want to hear. As Hoyte and I rush to him, we can see the blood pouring from his head. Yep...he decided to take the words literally to "5 little monkeys" and did his darndest to re-inact that song. So Mama called the doctor and the doctor said we had to come in quickly for some stitches. Poor thing.

He looks so sad and pitiful here, but I promise after the whole sewing process was over, he was his normal self and never looked back! (He was even a trooper when we had them out 4 days later!)
After that, things became a whirlwind with the upcoming CHA show and other work-related activities which show little to no signs of slowing, which hopefully somewhat explains my lack of posting.

But yesterday was the annual Preher 4th of July Bash (early this year as it's always held the Saturday before the 4th)...it's the event we look forward to all year. Amy and Scott always put on the most amazing, kid-friendly day. Everyone has a fabulous time - especially the kids! Things don't get started until about 4:00 in the afternoon, but they last until the wee hours. Ok, not so much for us - we're the lightweights who head home at 11:00, but still, it's always an amazing day!

We had food galore, kareoke, water balloons, sack races, volleyball, horseshoes, trampoline, bouncer, pool - you name it, it was there. And then when it got dark, there were the mandatory sparklers and fireworks show. 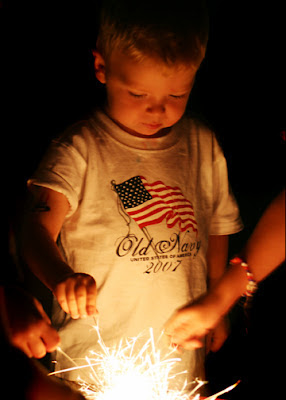 (Btw, the little redheaded cutie is my friend's daughter, Emma....don't you wish you had that hair??!)I think there were a total of at least 25-30 children, the majority of them my kids' ages. Turner had his best friend from preschool there and Ethan and Carson soon found some buddies to hang with too. They were like a swarm as they went from one activity to another. It was a riot to watch. They didn't want to go home when we finally pulled them away at about 11:00 that night. Already we can't wait for next year.

Happy 4th to all of you. Be safe and try to stay cool :) (P.S. This is my one year blog-iversary! I didn't realize that my first post was the 4th pictures from last year, so I feel a little RAK coming on. Drop me a comment with your name and what you did on the 4th and I'll enter your name to win a little something. Not sure yet what it'll be, but I'll figure that out here shortly! I'll leave this open until Saturday the 7th at midnight EDT and draw for the winner on Sunday!)
Posted by Kelly Goree Photography at 7/02/2007 12:53:00 AM 25 comments