So I know I'm sooooo behind in updating this darn blog, but apparently while it is always on my "to do" list, it ends up being the last thing I actually DO do. sigh. Truly - I have the best of intentions.

I have tons of things to update on and share pics of - among which is our apple orchard trip, the amazing CSC4K's event and Turner's first field trip. And I will...I promise! But first things first. This mama needs to brag a bit or I think I'll explode! 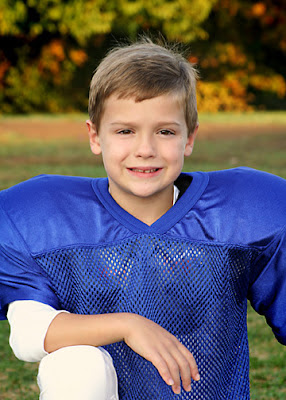 I have to introduce you to my son, the football superstar. You might ask what makes him a superstar and rest assured I'm going to tell you! Ethan has been playing sports for a long time. And he's a decent athlete. He was always improving and a great support team member but never the star. That is until football. Football is Ethan's passion. He is amazing at it - but even more than that, he gives it his complete and undivided attention. Any of you moms of 7-year-olds know exactly how rare that is! Ethan lives and breathes football and when he's on that field he is so focused.

So that brings me to Tuesday night. Normally the boys play their football games on Saturday mornings, so playing under the lights at the football field Tuesday was a real treat. The kids were fired up and ready to go. As always, my son was giving his all to the game. Mostly he plays tackle, but he always wants to run the ball because he's even better at that (or so he'll tell you). Lately the coaches have been giving him a chance to run. And everytime they do, E most always has positive yardage before he gets taken down. But Tuesday? Tuesday he didn't get taken down. My little boy managed to avoid several tackles before creating a hole up the middle of the line and ran his little heart out for a 60 YARD TOUCHDOWN!!! His first ever and the only one of the game! This mama is just about to burst...but if you think *I'm* proud, you should talk to his daddy! ;)

And just because I love this photo, here's one more... 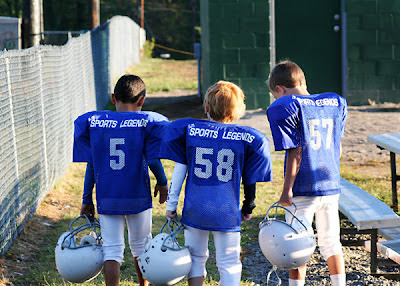 Kelly, I'm so happy for your little guy. He must feel awesome!Proud mommies are a good thing!

ahh there's something so darn cool about being the mom of a football player. congrats on the touchdown, that is so fabulous!

my football star can't run the ball do to weight restrictions this year, but look out next year.....boo-ya!

You have every right to brag, good for him!!

Oh, look at him! He reminds me of my son who is also 7 and just started tackle football this year too. He loves it. Be sure and scrap all those photos.

I just love the photo of the boys walking with their helmets! Definitely scrapbook material!!!!

awwwww...I can totally relate to the "proud momma" thing. I have a 9 year old son. Those photos are awesome! Something to cherish forever.