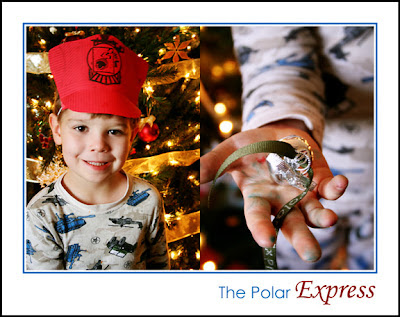 On the *ahem* 14th? day of Christmas, Turner had Polar Express Day at school where they were even allowed to wear their pajamas to get in the spirit. In the first classroom, they had the story "Polar Express" read to them and they pretended to be on the train. Then they went to another classroom where they made several crafts (among which is the cutest beaded candy cane for our tree), then had cocoa and cookies in still another class. In the afternoon, all the kindy classes got together to watch the movie. Talk about magical! I'm so grateful that the school thinks it's just as important as I do to keep the magic alive for these children and will go to such lengths to do special things like this. Turner even came home with a reindeer sleigh bell. (Can you hear it?)

Last night was our time to write our letters to Santa. Being the crafty mama I am, I couldn't just let them write on a plain sheet of paper (oh no!), so I made up special "lists" for their letters and we spent some time under the Christmas tree jotting them down. It was so cool to see Turner join Ethan in actually being able to write a good portion of his list all on his own. They want everything from an XBox 360 to a dog apparently. I hope Santa is listening well! Only 10 more days to go!

Oh, and please let me share these few pictures of our gingerbread house...because, well...that house is no more. Apparently some teeny tiny raiders snagged all the candy off of it once it was built, and sadly, it now looks like more of a shack than a house! So here it is in all it's glory, before it had to be condemned. Now poor Santa can't go down that chimney. sigh. ;)

I LOVE The Polar Express! What a magical school day for your son! "I Believe!" The gingerbread house is (was) great too! We are going to be making ours tomorrow (cause the weather outside(will be) frightful!), but I am sure it will not make it until Christmas. :-)

Hey Girl, just wanted to pop in and say hello! Your pics are wonderful, as always, and your gingerbread house is just adorable. Happy Holidays to you!!

LOve the gingerbread house. Your little guys sure are crafty! The one my girls decorated looks more like Clark's house in National Lampoon's Christmas Vacation --- extremely over-decorated (lol)! Could you post a picture of the cute paper you designed for the kids' Santa letters? I was thinking of doing the same thing and could use some inspiration!

Would you mind letting me in on the settings you keep your camera on indoors? I love the soft glow they all seem to have. Or are you applying an effect in Photoshop? Super cute pictures... and I'm still a fledgling photographer here so I need tips!! :^D